Will BLM Supporter who Knelt on Child’s Neck be Charged?

In the last couple of days, a photo of a BLM supporter kneeling on a crying, white 2-year-old boy with a message supporting “black lives matter” circulated on social media. The suspect is 20-year-old Isaiah Jackson, an Ohio man who was out on parole. He was also the boyfriend of the boy’s mother at the time of the incident according to the grandmother of the child.

Incident staged as revenge for the death of George Floyd

The photo is a direct reference to the former Minnesota cop, Derek Chauvin, who kneeled on the neck and back of George Floyd until he died, starting months of unrest and protests across the entire U.S. The Clark County Sheriff’s Office learned about the circulation of the photo on social media on Tuesday.

On the photo is a man kneeling on the neck of a crying white toddler who is only wearing a diaper. Another person holds the boy’s hands behind his back. The face of the second person is not visible. 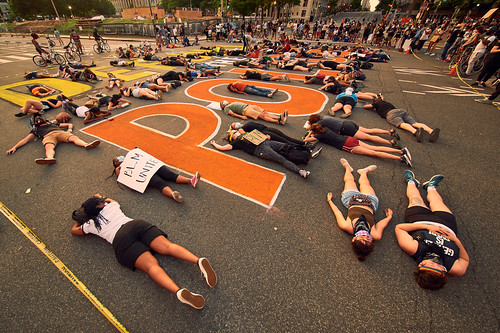 The Clark County Sheriff’s Office was able to discover the location where the incident took place and made contact with both the mother and the child, as well as the male suspect. Isaiah Jackson, 20, was taken into custody and held in the Clark County Jail.

A BLM supporter kneels on a white child's neck.

The double standard is breathtaking. pic.twitter.com/biPvYMJV8q

Jackson is on parole from the Ohio Department of Rehabilitation and Correction. He remains incarcerated in the Clark County Jail and is waiting, according to the sheriff’s office, for the county prosecutor “to provide a determination on the scope and breadth of the felony charges that will be supported by that office for presentation in court.”

HORRIBLE: The photo shows a man, who has since been identified as 20-year-old Isaiah Jackson, with his knee on the neck of a crying white toddler who is only wearing a diaper. Another person holds the child’s hands behind his back. https://t.co/392UECEXcu

The 2-year-old boy was taken to a local hospital for examination. Luckily, no injuries related to the incident were found.

According to the sheriff’s office, the mother told deputies that “she was unaware of the photo having been taken, or its contents until she had been informed by other parties while the Sheriff’s Office was en route to her home to begin the investigation into this incident.”

“I don’t understand how he could have done that to a 2-year-old,” Chasity Sowers, the grandmother of the child said. “Like he has no remorse whatsoever. Like he didn’t care what he was doing or what he was getting himself into.” Sowers found out about the incident from the mother of the child who used to be her daughter in law. That was after Sowers saw the picture on Facebook. “I hope they all get what they deserve,” Sowers said. “That little boy didn’t deserve none of that.”

Meanwhile, an Atlanta-area high school special education teacher is accused of commenting on the same photo on a Facebook post encouraging more violence against the white child. Teacher Brian Papin said in a comment beneath the photo: “Again! Your [sic] doing it wrong! One knee on the center of the back one [sic] the neck and lean into it until death! You saw the video! Get it right or stop f***ing around!”