On Monday, President Trump signed an executive order forbidding federal agencies, mainly in the technology sector, from firing U.S. citizens or green card holders if they would be later replaced with foreigners.

The White House’s Executive Order on Hiring American requires federal contractors to keep American workers instead of relying on use of H-1B visas to bring in temporary foreign labor for high-skilled jobs.

President Donald Trump's executive order preventing federal agencies from contracting or subcontracting foreign workers — mainly those on H-1B visa — for hire.
This is great news because Americans need those jobs more than ever and @realDonaldTrump is AMERICA'S PRESIDENT!!!

“This Executive Order follows his Buy American, Hire American Executive Order from April 2017 and takes further action to prevent Americans from being displaced by foreign workers,” the White House shared in a statement released Monday. “Under President Trump’s leadership, the firing of hardworking Americans in the pursuit of cheap foreign labor will not be tolerated.” 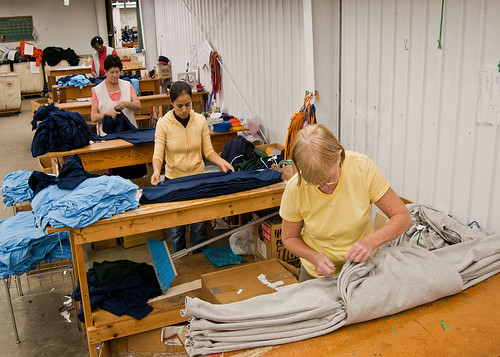 No more jobs outsourcing in Tennessee

Trump’s action was focused partially on preventing the outsourcing of jobs at the Tennessee Valley Authority, the federally owned corporation founded by congressional charter in 1933 to provide electricity, economic development, and other essential services to the region.

Trump shared at the signing ceremony in the White House on Monday that he would like to see CEO Jeff Lyash removed and called on its board to make sure Lyash “does not receive a lavish compensation package upon his departure too.”

“He gets $8 million a year, so that was just a succession of deep swamp things happening, and it’s a disgrace,” Trump stated. “So let this serve as a warning to any federally appointed board. If you betray American workers, then you will hear two simple words, ‘You’re fired.'”

Almost immediately after the order signing, Lyash got in touch with the White House, saying he was ready to settle the labor dispute. But Trump nevertheless fired Lyash, according to the Associated Press.

Foreign-workers restricted in the USA

Trump also signed an executive order extending foreign-worker restrictions till Dec. 31, pointing to the high unemployment rate among Americans. That order prohibited visas for most guest workers who come to the U.S. for temporary or seasonal work. That order does not apply to farm workers and some labor within the food service industry.

President Trump has shown he will always fight for American workers 🇺🇸🇺🇸🇺🇸

Trump also issued an executive order temporarily suspending immigration due to coronavirus, sharing it would be 60-day pause and impact only those seeking a green card, not temporary employment.

The policy change came after a lawsuit Monday by 17 states and the District of Columbia asking for the policy change. The lawsuit was originally started by several colleges including Harvard and MIT.