Owners of a Michigan bed and breakfast had to remove a Norwegian flag from the front of their inn because dozens of people, BLM supporters, confused the flag with a Confederate flag.

Greg and Kjersten Offbecker moved into the historic mansion in St. Johns years ago. Norweigan by heritage, they turned the building into a bed and breakfast called Nordic Pineapple and installed the flag as a decoration with the American flag hanging next to it.

In case you were wondering how dumb BLM supporters are:

Michigan Inn Removes Its Norwegian Banner After Getting Hate Mail Confusing It With the Confederate Flag https://t.co/LyGwNxwnYd

Unfortunately, dozens of guests and people driving by the inn wrongly believed the couple was flying a Confederate flag.

“They are the same color, but there are no stars on the Norwegian flag, and the Confederate flag is a big ‘x’ and the Norwegian flag is part of the Nordic countries, they’re all crosses,” Kjersten Offbecker shared.

The couple decided to remove the flag last week to attract more customers and stop the confusion.

“We started to have this concern that it was deterring people away from coming to our bed and breakfast,” Offbecker said. “That they would see it and make this judgment.”

According to Offbecker, the flag was a representation of her heritage, but with the confusion, she took it down because it was not worth the frustration. She said they have received horrible and cruel emails and phone calls over the issue.

Norwegian flag removed from bed and breakfast after locals think it's a Confederate flaghttps://t.co/JFI6f9tT1I 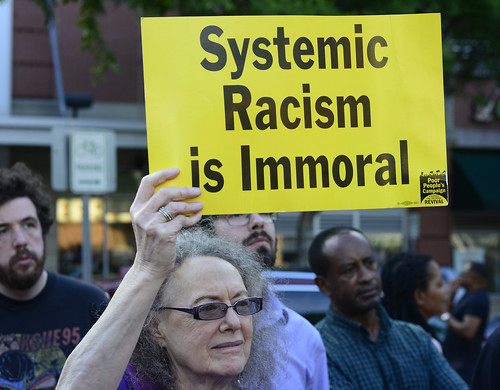 “We Protest The Police Killing Of Robert” (CC BY-NC-ND 2.0) by Stephen D. Melkisethian

Some people even thought that the home was built by Confederate leaders and held it against the owners. The truth is that it was built by union workers for the daughter of the founder of Saint John’s.

The owners of the inn still want to pay homage to their ancestors. Flying the Norwegian flag was a way how to do that. Now they are trying to find a new way to accomplish that without getting complaints or losing customers.