In the middle of the coronavirus pandemic and ongoing riots and unrest, the Seattle city council is planning to decrease the budget of the city’s police department by 50 percent, resulting in layoffs for hundreds of officers.

“Defunding the police is a radical experiment that will hurt the vulnerable,” one member of the public called into the phone-in council meeting.

Petition to stop the defunding

Recently, the union representing police, the Seattle Police Officers Guild, has collected more than 20,000 signatures on their “Stop Defunding” petition.

Proponents of the “Defund the police” plan believe that it would be part of an effort to improve race relations in the city after years of excessive force against minorities and other claims of mistreatment.

The Seattle Police Officers Guild President was just literally BEGGING FOR ALL CITIZENS TO HELP END the DEMONIC DEFUND THE POLICE ANARCHIST "MOVEMENT"!! There's a website that I think is "STOP DEFUND the https://t.co/XQvRROJK3n" or similar! I'll check it but please try that!

“Nothing less than defunding will begin to heal the violence committed by police against Seattle’s Black, Brown, and Indigenous communities,” said another person addressing the council during three hours meeting.

JUST IN: Sources within @SeattlePD advised me that @MayorJenny will Defund Seattle PD by 50% if they use CS gas on protesters.

This leaves SPD defending the public and themselves with batons and pepper bullets if riots break out.#seattleriots #seattleprotests

Seattle the epicenter of riot and unrest

Seattle became the hub of rioting that has affected many cities across the U.S. The unrest there has involved the infamous “CHOP” (Capitol Hill Organized Protest) zone, where protesters gained control over about six blocks of the city’s Capitol Hill neighborhood. They were planning to establish a “police-free” area. After two fatal shots took place there the city regained control over the CHOP zone.

President Trump and other Republicans criticized Seattle along with Portland, Chicago, and other cities because their Democratic leaders seem to enable the rioting and destruction instead of enforcing and maintaining public safety. 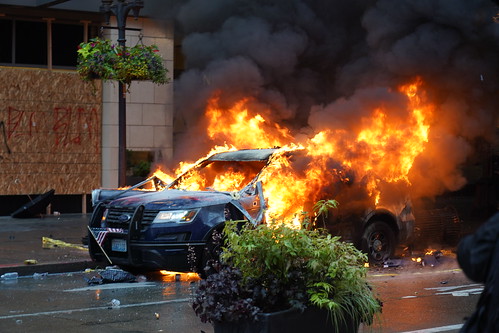 On Wednesday, Seattle police union leader Michael Solan expressed dissatisfaction with Mayor Jenny Durkan, who said that President Trump was using federal officers in Seattle and other cities “as a political tool” in what she compared to a “dry run for martial law.”

Solan commented that “Clearly what the dry run for Seattle was, the experience where multiple people were shot and killed.”

At the time of writing this article, a veto-proof majority on the city council is in favor of the cuts to the police department although public support is split.

Council members plan to account for the coronavirus outbreak in the revised current year’s budget. On Friday, they are scheduled to start debating the plans for defunding the police. Voting on a revised city budget for the remainder of the year is set to take place on August 10.

Senate is Set to tackle the $1.9 Trillion COVID bill as...

Sexual Harassment Case Against Cuomo Will Be Handled by Atty. General...