About 40 people were arrested, and more than 20 police officers were injured Saturday after the BLM protest in Seattle turned violent with trailers set on fire, windows smashed, cars damaged, and explosives thrown at police.

Seattle Police Chief Carmen Best confirmed that Saturday’s BLM protest was not a peaceful demonstration at all because many people and businesses were put at risk.

As of 10pm: Police have made 45 arrests in connection with today’s riot in the East Precinct. 21 officers sustained injuries after being struck by bricks, rocks mortars/other explosives. Most officers were able to return to duty. One was treated at a hospital for a knee injury.

Saturday afternoon, a large group of people met at Seattle Central College at East Pine Street and Broadway at around 1 p.m. They started marching peacefully and were heard shouting for the defunding of the SPD.

Around 4 p.m., about a dozen people began a rampage of destruction as the group marched past the King County Youth Detention Center at 12th Avenue and Alder Street, targeting the site.

Some rioters with sledgehammers started breaking workers’ car windows in the parking lot. One rioter stole a flagger’s stop sign and used it as a weapon. A row of construction trailers on 12th Avenue was set on fire after some rioters jumped a fence and five of them were completely destroyed. The site used to be an old juvenile detention center. At the time of the protest, workers were building a new parking lot there.

A Starbucks five blocks up 12th Avenue at Columbia Street was looted. Everything outside and inside the shop was shattered, mangled, and destroyed including the nearby parking pay stations. 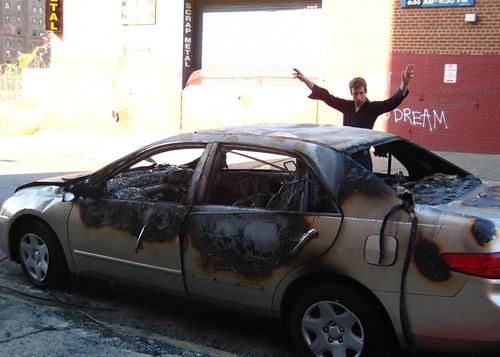 Some protesters spray-painted cameras to disable them near the East Precinct at 12th and Pine.

Other protesters climbed the fence and set off an explosive device, leaving an 8-inch hole in the side of the precinct.

Due to the ongoing damage and violence, police declared a riot. The protesting crowd threw rocks, bottles, and mortars at officers during their march.

If protests results in destruction & chaos through illegal action to a point where the police has to respond, you're not engaging in "peaceful protest". If officers are attacked & injured, it isn't "peaceful". These instigators shouldn't get away with this.https://t.co/JZHsN9BvjU

Around 21 officers were injured on Capitol Hill, including one who suffered a knee injury caused by an explosive device. Most were able to return to work after being treated for their injuries.

Police deployed less-lethal tools to disperse crowds, including OC spray, blast balls, and 40 mm sponge rounds but did not use tear gas.

During the riot, police arrested 45 protesters for assault on officers, obstruction, and failure to disperse.