Most voters support President Trump’s decision to use federal agents to fight the growing violent crime in major cities across the USA. Many of these supporters also believe that most of the administrations of these cities are bringing crime and chaos upon themselves.

This was discovered by a Rasmussen Reports national telephone and online survey. Over 55% of U.S. Voters thought that federal law enforcement officials should be used to suppress the growing level of violent crime in several major cities because most of these cities seem unable or unwilling to handle the problem themselves. Only 36% were against this federal anti-crime help.

https://t.co/8GjOQSHrzp Americans want to be safe in their homes and businesses – which @realDonaldTrump is fighting for. @SpeakerPelosi @JoeBiden @HouseDemocrats have chosen #BLMTerroristMarxists #AntifaDomesticTerrorists

Eighty percent (80%) of Republicans support the use of federal law enforcement in the cities currently run  by Democrat politicians. Thirty-nine percent (39%) of Democratic voters are against it. Forty-eight percent (48%) voters not affiliated with either major party want the feds to get involved, 39% of them are against it.

Fifty-one percent (51%) of all voters believe that government policies and practices support violent crime in some cities and states. Only 24% are of the opposite opinion, while another 24% don’t have any opinion.

More Details from the Rasmussen Report.

This survey was conducted on July 21-22, 2020 by Rasmussen Reports, and about 1,000 likely voters were polled. There could be a small sampling error in the amount of +/- 3 percentage points.

Sixty-six percent (66%) of Americans are strongly against defunding police in the community where they live. Sixty-one percent (61%) believe violent crime will increase in communities that reduce the police budget. 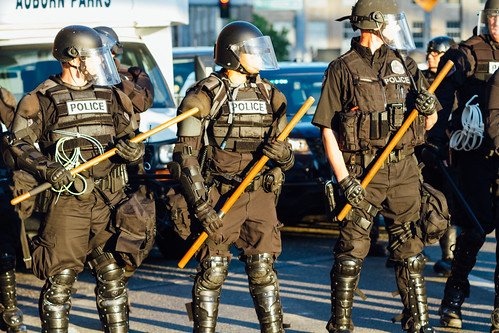 Middle-aged voters strongly believe that some cities and states are using policies and practices encouraging violent crime. White people are more convinced of this than Black and other minority voters.

Interestingly enough, seniors are the most resistant to using federal law enforcement in some cities. Also, other minorities (68%) are pro use of the feds much more than whites (53%) and blacks (50%) are.

Sixty-four percent (64%) of all Americans are concerned that the increasing criticism of America’s police will cause a shortage of police officers and decrease public safety in the community where they live.

In comparison, when Trump first proposed sending federal law enforcement to Chicago in January 2017 to help deal with its rising murder rate, only 36% of voters believed that was a federal responsibility. Fifty-six percent (56%) said dealing with local crime was more of a state and local responsibility.